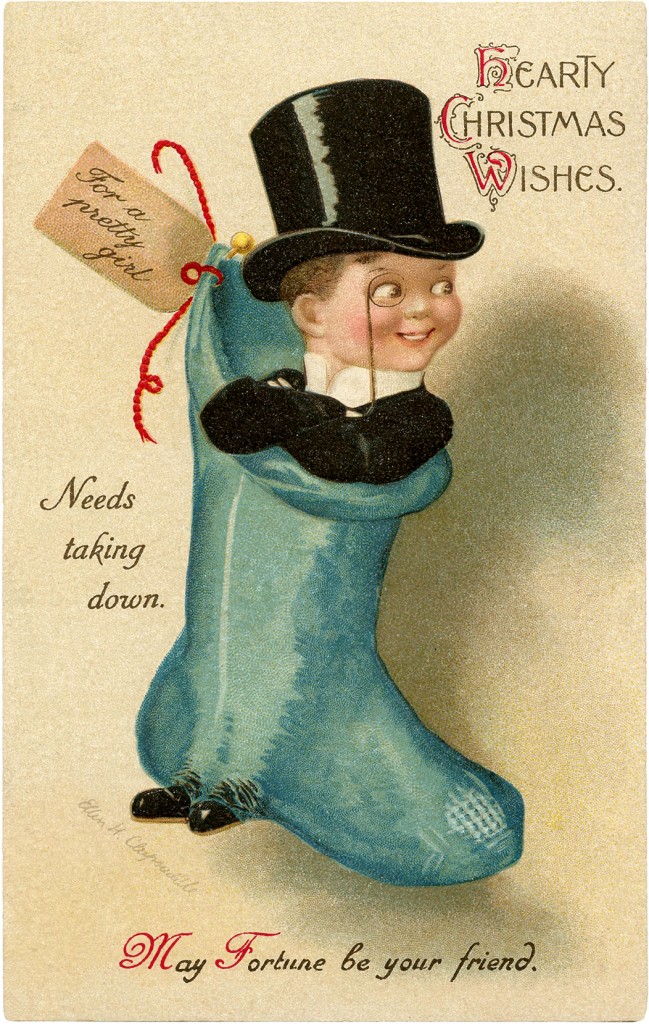 This image is compliments of http://thegraphicsfairy.com

There are times when you see something you like and you must grab it and put it in a post immediately. I like the Fortune caption. It does seem appropriate for Thanksgiving except for the stocking, but I think it would be an alternative to the ever popular Elf on a Shelf. This is a Top Hat Guy in a Stocking. Think it will catch on? I like the concept of a good luck guy more than a tattle-tale elf, but that’s only my personal opinion.

This guy reminds me of the Monopoly Man, but he’s younger. Now there’s Edgar Bergen’s  Charlie McCarthy “dummy” he made popular. Huh? You may be saying. Yes, it was quite a long time ago so I’ll show you a picture:

Do you see the resemblance? Yes? I thought you might. In any event, this Top Hat Guy in a Stocking caught my eye when I was looking for another vintage picture.

See how easy it is to get side-tracked?

I can’t tell you how many vintage pictures I’ve gone through . . . didn’t find the one I was searching for, but this one works better with the story I planned to tell you.

My father’s Uncle Al was a real story teller. He had some great adventures growing up. He was the youngest in his family, so he was always competing with his older brothers and sisters. He decided he was going to supply the Thanksgiving Turkey for the family one year. Well, I have to tell you that Uncle Al’s best intentions sometimes didn’t work out as planned.

You see, he and a friend met a man at the train depot. The boys could always find work for a few dimes around there. I know a few dimes doesn’t seem like much money, but back it those days a dime went a long way.

The man told them that a load of turkeys was coming in and he needed to hire some boys to take them to the various butcher shops in town for him. They were going to get a quarter for their efforts.

In those days the turkeys would be delivered alive and the butcher . . . well, the butcher did what a butcher does to prepare turkeys for his customers to buy and cook for Thanksgiving.

Uncle Al had a big wagon his brothers made for him with tall wooden planks built up on the sides. He was sure he could get a few turkeys in there and be able to earn his quarter, but his friend was able to get a real horse drawn wagon they could use. The only problem was the friend’s father and older brother came along.

Now, Uncle Al was content with his quarter and his wagon, but the friend’s father was haggling over the price. And in the meantime while the men were talking, the older brother let the turkey’s out of their cages.

As you can imagine, turkeys were running all over the place.

Uncle Al took off pulling his wagon behind him. He was determined to catch a turkey or two. Even if the depot man wouldn’t pay him, maybe the butcher would . . . or at least dress one for their Thanksgiving dinner.

Those turkeys give him a mighty chase. Uncle Al was exhausted. He rested beside his wagon to catch his breath.

From under some bushes on the side of the dirt road, he heard some faint gobbles. He watched. He waited. He slowly got to his feet.

Not one, but two turkeys came at him!

He grabbed one and put it in his wagon and chased after the second one.

All thoughts of a Thanksgiving turkey dinner were forgotten. Those two turkeys lived in the back yard for many years.

Just for the record, Uncle Al did bring home a turkey for Thanksgiving . . .

I hope you enjoyed the story and can appreciate the little Top Hat Guy in the Stocking. I’ll work on figuring out how to make something with him. You may be way ahead of me 🙂

May you have a Happy and Prosperous Thanksgiving!

Enough foolishness! I have things to put together so your week . . . will be great with goodies . . . 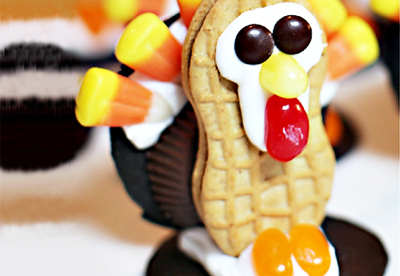 This little turkey has lots of pieces to put in place. Have you guessed all the ingredients? And . . . you can change them to make them original to you.

Here are the ingredients . . . how many did you get right?

Now, just follow the picture and before you know it you created a delicious cookie turkey! And since you bought all the ingredients you might as well make a whole bunch of them. A “rafter” of turkeys . . . not a flock . . . or a gobble . . . since you have a whole doggone week off, you should still learn something!

Moving on, we have this handsome fellow: 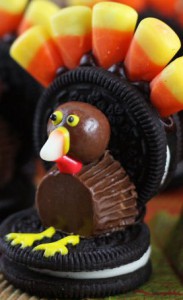 Once again, do you know what you need to make these adorable turkeys? Maybe this is just too easy, but it’s lots of fun!

Here’s what you’re going to need (some left overs from the above recipe will work fine):

Now, putting these together may be a challenge.

This is so easy . . . I’m almost cheating on this one! Here’s the picture:

Do you know the ingredients for this Pilgrim Hat? Need a hint? There are only four ingredients:

Putting the Pilgrim Hats together:

There you have three Thanksgiving themed goodies the kids can help you make.

Thanks for stopping by!  Have a Happy Thanksgiving!!!

Chilly nights and chilly or downright cold days and nights requires a little extra heat in the house to keep your family snug and warm all late fall and winter long. This portable radiator does the job!

This is an excellent portable heater I use in the garage when I’m working on a project. It keeps me comfortable. I have two of them. They’re an excellent heater.

You may also enjoy:

Grandma’s house was always a busy place for the holidays.

I remember seeing more than the relatives that were busy in the kitchen preparing our Thanksgiving Day dinner. I knew to keep still and quiet or I’d be rushed out of the kitchen and maybe out of the house. Sometimes that wasn’t so bad when the wind wasn’t blowing or it wasn’t raining.

I did like going to the train depot to see people coming and going. It was much busier than Grandma’s kitchen.

With my dad in charge of us, he’d always find something for us to eat to keep us happy and the hunger pains away.

Sometimes we’d go to pick up a relative or just go for the activity of the place.

My dad’s brother, John, and his Uncle Al would sometimes join us. Uncle Al always had stories to tell. The problem with Uncle Al’s stories was that you never knew when the truth spun off into fantasy. Nevertheless, they were entertaining.

In those days, the stores were closed on Thanksgiving Day.

You had to be prepared. And you had to be prepared in case a relative didn’t bring what they promised. There was, however, a corner market that was run by an elderly couple who took pity on the forgetful Thanksgiving Day non-planners and were opened from 6 AM to noon. Of course, we paid them a visit.

Uncle John had Grandma’s list. We were getting ready to check out when I saw my Great-Grandma. I knew Grandma forgot something on the list she gave Uncle John. I told my dad we needed more yams, butter, coffee, brown sugar and some spices. My father didn’t hesitate to follow me as I followed Great-Grandma to collect some necessary items. Uncle John soon discovered that I had a second sense about such things. This saved us a second trip to the little market. He’d sometimes add a few items for good measure.

While we were waiting for the turkey to be done, Uncle Al told us a story about the year he decided to get the family turkey.

“Well, being the youngest, I had to come up with something special to outdo my older brothers,” Uncle Al began. “I listened very carefully to their Thanksgiving plans and those of my sisters. Not one of them mentioned the turkey. So I announced one day at breakfast that I’d provide the turkey for Thanksgiving Day.

“There were doubts that I could do such a thing, but no one stopped me from my grand gesture.

“I had worked out a deal months before with my friend Leo and this guy we met at the train station. He had turkeys coming in and needed them delivered to the various butcher shops in town.

“Leo’s father had a wagon we could use. We were excited and met the man after school at the depot. The only problem we had was that Leo’s father met us there and started haggling about the price we’d be paid.

“I stood back. I told the guy I’d deliver the turkeys at the agreed upon price. Before I knew what was happening, one of the cages with the live turkeys inside opened. There were turkeys running all over the place. Then another cage opened and then a third. The man yelled, ‘Catch ’em!’

“I took off at a dead run after one, then one came behind me and I thought I’d be able to catch it. I was running all over the place. I finally caught one and held on for dear life. I got pecked a time or two, but I kept my grip. This was going to be our Thanksgiving dinner.

“I was walking down the dirt road for home. I was getting tired. That turkey was heavy.

“‘What do you have there, Al?'” my eldest brother Fred asked.

“‘Our Thanksgiving turkey,'” I answered proudly.

“My brothers helped me up in the old truck with the turkey. They tied up the turkey so I could rest my arms.

“When we got home, my brothers made a pen for the turkey.

“As it turned out, with all the turkeys that were let loose at the train depot, some were still running loose. Fred brought one home. He did the deed and we had turkey for Thanksgiving. But my sisters were eyeing Tom in the cage and thinking he would be just right for Christmas dinner.”

I saw Great-Grandma smiling at her youngest son. I got the impression this was the first time Uncle Al told a story as it actually happened, but I did wonder and had to ask, “Did you eat Tom for Christmas?”

I had to wait until Christmas for Uncle Al to continue his story.

Roaster Oven For Your Holiday Meal

I’m always looking for a time saver and I’ve found it with this popular Oster Roaster Oven. This little beauty will roast up to a 26-lb turkey! The lid keeps all the savory juices locked in the steam to keep your bird or other meat juicy and tender. I’m a real fan of this roaster oven.

For the holidays and big parties, this oven keeps the regular oven free for baking other items. It’s a real winner and top seller!