Goo Was Dripping From The Wall

I was at my local antique mall quite some time ago and as I was looking around I noticed goo dripping from the wall.

We did have quite a bit of rain, but it wasn’t the normal rain type of drip unless there was something in the attic that made this happen. It gave me an uneasy feeling and I was heading out the door when one of the owners stopped me and asked if I had a minute to look at something. 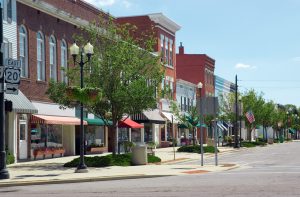 I asked if it had anything to do with the goo dripping on the wall and she nodded.

I should have walked right out the door, but I followed her up a narrow set of stairs into the attic. We located the place where the dripping seemed to originate.

A part of me wanted to see this through and another wanted to run.

There was a cabinet on that wall. The old kind that could be used for a closet or storage. When she opened it up, I could see there were boxes of things in there. I learned this belonged to a man who had it for sale, but it never sold. He had passed and his family couldn’t be located, so they put it in the attic until they could decide what to do with it.

I noticed scratches on the inside of the door and the walls. These weren’t scuff scratches, these were deliberate scratches where someone was trapped inside and wanted to get out.

One of the other women who worked in the store had a disturbing story to tell about that portable closet.

While it was still on display, a psychic came in and told her that this antique closet had bad energy. Children were placed in the closet for punishment. Most of the time they would cry and go to sleep. Once it was quiet, their father would let them out.

But one child was not let out for several weeks. It seemed as though the father and other children forgot all about him. They were gone for several weeks, perhaps visiting family. The little boy banged on the door and kicked it, yelled, screamed and cried. No one came to let him out.

When the man and his children returned, the little boy was dead inside the closet.

This is a sad story, but it does get worse.

The man buried his son in the woods behind his house. Why it decided to drip goo on the wall was anyone’s guess.

The owners of the antique mall decided to have a séance and invited me to participate.

The night of the séance I arrived at the appointed time, met the psychic and the other participants. Candles were lit on the table, we held hands. There was a prayer of protection. I could hear a child crying. I could feel the pain from hunger and thirst this child was feeling. It was horrible. Others had similar experiences.

The little boy’s name was Dana and he was being punished for breaking a window — he threw a baseball through it. The father thought he did it deliberately and locked him in the closet while he and the other children went to the beach on their planned vacation. No food or water was left for him. No one came to check on him or the house while they were gone.

He spoke of being told to go into the light, but he was too afraid to go. He knew he had to stay in the closet until his father returned.

During the séance, Dana was directed into the light by the psychic. It was a beautiful thing to set this child free.

The women who owned the antique mall were able to scrub and repaint the wall.

They were torn about removing the antique closet from the attic. Although it was a horrible reminder of what an innocent child went through, it did eventually have a happy ending.

I would have discarded the antique closet. It’s not haunted, but it was a place of punishment and also the death of one child. It’s sad to learn how furniture was used by others. I’ve seen many of these antique closets. After this experience, I wouldn’t have one in my garage for storage.

I’m reminded of a story I heard recently about an old abandoned asylum and how the “patients” were deglected and worse . . .

Most of these “patients” had mental illness and some were mentally challenged . . . and there were a few who were criminally insane — having been sentenced to that particular facility.

They were all in that same facility . . . together. The only separation was a women’s section and a men’s section. No other accommodations were accessed in keeping the rift-raft away from those who couldn’t defend themselves.

It is sad to know that such facilities existed.

But it is positive that we do have ghost hunters and individuals who explore abandoned places to give us a “wake-up” call from time to time.