I have been communicating with spirits by using candles.

It started years ago when I was young and living at home with my parents. We had a power outage and my mother lit some candles so we wouldn’t be sitting in the dark. My father took a flashlight out in the garage to find an old lantern or two.

While he was setting up the lanterns, he spoke of how on the ranch they used these lanterns regularly. The power was always going out on windy or rainy days. He also said that there were spirits around us all the time. If we wanted to communicate with them all we had to do was ask a yes or no question. He started out by asking, “Is anyone here? To answer yes, make the flame grow brighter.”

We waited and watched. The lantern grew brighter and the flame of the candle on the coffee table got higher.

“Is there more than one spirit here?” he asked.

“Will you answer some questions for us?”

We had a discussion about our next question. We wanted to know how many spirits were in the room with us. So we started with numbers. Then we wanted to know who was here. Was it a relative or someone who lived in the house or on the property before the current house was built.

This particular night, there were two spirits — a man and wife. They were not relatives so we had to guess a lot of names. We resorted to the alphabet to narrow down the names for the man and his wife. They were Isabelle and Jacob. They didn’t live in the house or on the property, they had an accident on the property and died there.

This was enough for my mother. She didn’t want to communicate any more with Isabelle and Jacob. She did say, “I’m sorry what happened to you, but please leave now.”

My brother asked after a few minutes, “Is anyone there?”

The flames stayed steady, but we could hear whispering of two women. We weren’t sure if Isabelle was still around or if she left with Jacob or if some other spirits came to join our little communication session.

I think my mother was more unnerved by the situation than the rest of us. She brought out a battery operated radio and turned it on. She was trying to drown out the whispering we heard earlier.

It was the eeriest sound … then the front door opened and all the cupboards in the kitchen opened about the same time. We all sat still with our eyes as big as saucers.

My father got up to investigate. No one was at the front door. He closed all the cupboards in the kitchen, but he did decide to get out some plates and glasses and set them on the kitchen table. He thought some milk and cake would be appropriate to have to settle our nerves.

My mother moved the candle to the table. My father already set the lantern in the kitchen.

We were just finishing up our cake and milk when there was a loud knock on the front door.

“I wonder if it’s Jacob and Isabelle?” my brother whispered to me.

My father went to answer the door and I was right behind him.

There was a man carrying a lantern. He said, “I’m just checking to see if you folks are all right.”

“We’re fine,” my father answered.  He waited for more information before asking, “Do you know how long the power is going to be out?”

“We’re working on it, but it may take a few hours.”

My father thanked him for the information and closed and locked the door.

We had no sooner relocated to the living room when the lights came on.

At school the next day everyone was talking about the power outage.

I wasn’t going to volunteer about our ghostly communication and the events of the evening, but Larry wasn’t inhibited at all.

He spoke about how he and his siblings used the candle to communicate with spirits. He told of the ghost of his grandfather who came to visit.

This gave Rosemary courage to speak of the events that happened in her house. She said that they lit candles, but didn’t ask questions, but did watch the flame. They heard footsteps walking in the hallway, opening doors to all the bedrooms and opening closets. She and her siblings knew from the sound on the hardwood floors exactly where the spirit was. Later, when they had to go to bed, Rosemary noticed that her dolls were moved and the clothes hanging in the closet were all moved to one side.

I still didn’t share my experience. I was relieved I didn’t have an actual ghost walking around and moving things.

Years later I asked my father about that incident. He remembered it clearly.  He admitted that the man who came to the door seemed odd.

“Do you think it was Jacob?” I asked. I had always wondered if he was looking for help after his accident with Isabelle.

My father just said he wouldn’t have been surprised. Or it could have been another spirit. The house was on a hill and there were lots of accidents that happened years ago on that road.

Communicating with candles is not the easiest thing to do. That’s why many people use Ouija or Spirit Boards. It seems the Ouija Boards have been receiving negative comments so people have resorted to Spirit Boards. Perhaps communication with any spirits is frowned on by many regardless of the form.

I don’t use Ouija or Spirit Boards, but I do use candles. I usually don’t have the patience to communicate for a long time, unless the information I receive is interesting, but it usually isn’t. Spirits like to let me know they are here, but they don’t seem to have anything else to communicate.

Now, we have Spirit Boxes to help us communicate with spirits. It isn’t always easy, but some spirits do come through clearly if they have something important to communicate.

It is important to record your sessions with the spirit box so you can replay it over and over again. Some EVPs are difficult to understand while others are quite clear.

And, with Halloween coming around, it may be good to gather some friends around and do a spirit box session or two.

From some recent YouTube Videos I’ve watched, it seems October is an excellent month to go ghost hunting … but don’t do it alone … have a group of friends with you — and no horse play. This is serious business and you need to have people around you who take it seriously as well.

Just this afternoon I heard voices when I took my barrels out to the curb. No one was around, but I did hear talking . . . It could have been neighbors in their back yards, but it didn’t sound like the echo from neighboring yards … It was creepy.

I love having something I can make, set out and make minor changes to from time-to-time. 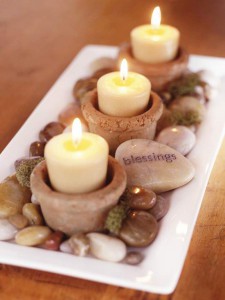 It is inspiring to paint messages on rocks as reminders of how very blessed we truly are.

I may get into my fall mode and write “thankful” with a “boo” here and there. It can be like a memory game. I can paint the sayings and turn the rocks over and as the season progresses try to remember where I put the saying I want to feature.

I’ve added crystals to my rock assortment. The images does look a bit generic to me, but you can add fall leaves and small pumpkins and dried fall flowers to make it a bit more festive. Then change it for winter, then you’re back to the beginning for spring and summer. You could do some lovely things for Christmas and Easter, too.

This does look summer to me. I’m sure you have a gazillion ideas of how you can make a holiday centerpiece with this idea and candles.

Inspiration always begins from within. This is like a blank canvas . . . it just needs your master touch.