There’s an old park in town with a sinister history.

I avoid it as much as possible.  There is an open theatre there and during the summer they put on family plays.  They are held in the afternoon so the park is empty well before dark. This is also a popular place for Easter Egg Hunts and activities for children on Easter Sunday.

Many have seen apparitions on stage and there have been reports of seeing robed men carrying lanterns and chanting while they walked throughout the park. It is believed to be a satanic group that has taken over the park and also responsible for the attacks that many claim to have occurred over the years. Some believe their are demons hiding in the bushes keeping an eye on the park.

Actually, there are conflicting stories. There are those who want people to stay away from the park and there are those who say the park is safe and nothing has happened there. I believe what I have personally experienced and what I’ve heard from reliable sources.  And, as I said earlier, I avoid the place.

Early one Saturday morning I heard the insistent ringing of my doorbell.

I couldn’t imagine who it could be and I was going to ignore it when I heard my name being called. I knew it was my friend Barbara. Her husband, Harry was in the car with their nephew, Joel and his girlfriend.

“Grab your coat and come with us.” Barbara ordered.

“Where are we going?”

She must have sensed my hesitation. She grabbed my arm and led me to their car.

“Last night I couldn’t sleep and I heard chanting out in front of the house,” she began. “I didn’t want to look out front so I looked out the side upstairs window and I saw a long procession of dark robed people carrying candles. It was the largest group I’d ever seen gathered. The chant was almost like a growl that rumbled down the street. I was scared.”

“Julie and I were coming home from a movie when we saw flickering lights up in the hills near the park,” Joel added. “We decided to investigate, but the wind started blowing and we were being peppered by hail. It stopped after we turned towards Julie’s house.”

“This morning my sister and I went jogging up near the park,” Julie said. “We could hear something in the hedge, like it was stalking us. We cut across the street and that’s when we saw candle wax on a rock formation shaped like a pentagram.”

Evidently, Julie and her sister ran home, called Joel, who called his Aunt Barbara, who came to get me . . .

“Now, we’ll have proof of satanic activities going on at the park,” said Barbara.

Quite frankly, I didn’t care. I’m content to allow people to do as they please as long as they don’t involve me in their activities. I didn’t really want to see the pentagram or be anywhere near that park, but I held my tongue.

Harry parked the car and we got out with Julie leading the way.  Yes, there was evidence of a pentagram with candle wax melted on it. It gave me a chill. The wind picked up and before we got back to the car, it started to hail.

Something strange was definitely going on and we didn’t need to be out there.  Harry couldn’t get the car started. There was panic in the car. The windows were all steamed up and at various places the message “Get Out” was scrawled on the windows.

Harry got the car started and we darted down the street away from the park and the pentagram.

We went to Barbara and Harry’s house. That was all right with me, I wasn’t ready to go home just yet. We sat at the kitchen table while Harry made a fresh pot of coffee. Barbara started cooking pancakes, she cooked when she was upset. It was fine with me, not that I wanted breakfast, but it was comforting to watch “normal” morning behavior.

Then Barbara said, “I didn’t get one picture!” Then started laughing. “Do you want to go back!”

We knew what we saw and what we experienced. We didn’t need a picture, the memory was freshly imprinted on our minds. It wasn’t an experience we would soon forget.

We settled down to eating our pancakes and discussed everything except the incident we just experienced. We didn’t want to open the door to going back to take a picture or do a video.

While writing a post on my website, ChristmasGoRound.com, I started thinking about things . . . things that mysteriously move around the house . . .

The website mentioned is my Christmas website, obviously. I was discussing how older children can get in on the fun of moving the Elf on the Shelf for younger siblings . . . but if you’re not aware others are moving the Elf around . . . it could be a bit freaky.

But, it could be anything out of place that may startle us.

I’ve also gone “ghost hunting” and ran out of a place screaming . . . Laughing at myself later is the fun part.

We’ve all played pranks on others from time to time.

I remember cleaning up candle wax, rolling it into a ball . . . I don’t know what possessed me to do it, but I tossed it into the air so it would stick to the ceiling.

I left it there wondering how long it would take for someone to notice it.

I couldn’t stand it any longer, so I pointed it out.

This got the ball rolling. No one could take their eyes off of it.

It was fun to watch my friends walk in and immediately look up to the ceiling.

Eventually, that glob of wax fell down from the ceiling . . .

The absence of that glob brought on quite a stir among my friends. They knew it was somewhere in the house. Not seeing it was creepier than seeing it.

I remember my friends moving the furniture. Looking under the coffee table . . . they even walked around carefully . . . they didn’t want to step on that glob or even bits of the glob . . .

Thanks for stopping by.

What is it that you could do that would bring on that creepy feeling . . . I had thought about adding these ghouls to flat surfaces . . . first one over here . . . then one over there . . . just in odd areas around the house . . . then having another join one of the others . . .

I wasn’t thinking of doing anything uniform or predictable . . . maybe have a group together . . . It would be great to have one and make it in different poses . . . that would be creepy . . .

I like keeping the Halloween spirit alive throughout the year . . . That’s the season when most people think about ghosts, ghouls, goblins . . . but throughout the year we do tell ghost stories . . . maybe these guys from Ravensblight.com could be added to your spring and summer decor.

I like to add them to his various haunted houses.

These guys could be added to cupcakes . . . cards . . . inside the coffins . . . you could even use them as bookmarks. They would be fun in mini-albums and scrapbook pages . . . You could even add them to your hostess gifts . . . you always want to share with your friends and family . . .

It does bring some character to the old homestead doesn’t it? They’re all gathered to greet you. How lovely.

Now, wouldn’t it be nice to have them peeking out the windows . . . you’ll have to decide this as you’re constructing this old house . . .

Just click the image if you’d like the make this ‘ghost house.” I’m especially fond of it because of the hidden secret chamber . . .

This is a great house to begin your paper craft collection of haunted places . . . It is absolutely perfect as a centerpiece for your next ghost story telling gathering . . .

Maybe you and your friends could make these one evening while telling stories . . . you could combine a craft and ghost telling night . . . Someone may prefer to build a ghost ship . . . that would be fun, too. A lot of people are into the pirate theme . . .

This is one scary pumpkin! If you dare, look closely and you’ll see pumpkin guts clinging to the skeleton rubs. You’ll need to save the insides of the pumpkin before carving the head. My concern is how is this going to smell. I’m also wondering what this would attract. I don’t know if I would want to set it out on my porch, maybe in the yard with gravestones and ghosts. I wonder if the squirrels would enjoy it, hummm.

I may opt for dry leaves. There is moss on his shoulders. This is truly a clever pumpkin-skeleton combination that I saw on Pinterest. I had to share it with you. 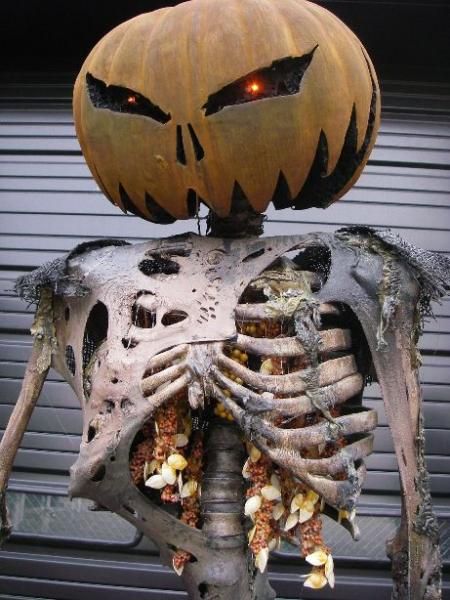 There are no DIY directions, but the picture explains it all. I also believe the lights in the eyes are battery operated tea or votive lights. You could wedge something inside the pumpkin head to set the lights on or wire them around the neck of the skeleton.

Let me see if there are any suitable links to help you out with this project.

I’m sure the photo above and the options here have gotten your imagination in gear. I do like the idea of a pumpkin head, but . . . the guts . . .

I’ll keep bringing you interesting things, we have awhile before Halloween.