Is This Creepy? Or Do You Have Old Photographs With A Shadow?

Take a good look at the photograph. 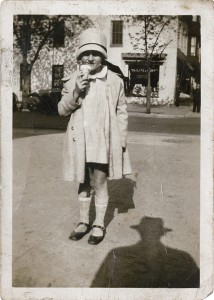 Does it make you hungry for an ice cream cone or give you a sense that something sinister is afoot?

Throughout the United States and perhaps the world there are countless old photographs of the subject being photographed plus the figure of a man wearing a hat.

Is it a stalker? Has it been photoshopped in? Oops! no photo shop back then. Many people have noticed this is several of their own photographs.

You probably know there is a logical explanation to this.

Yes, it is the man taking the photograph.

So, throughout the decades, we have captured the object of the photograph plus the photographer in shadow form. Back in those days there were many box cameras where the viewer was on top of the camera. So you don’t see the hands up with our modern cameras at eye level or the image of the camera.

It’s amazing how common this is and can be found in just about everyone’s old vintage photographs . . . unless they were discarded. I find it amusing and funny to realize how many people have similar “shadow” photos in their collection.

I think it’s kind of cool, but I like stuff like this. It can fuel the imagination or draw you into the shadow . . .

I’m always curious by what I can’t see than what I can. I wonder who the man was taking the picture. Most likely it was the father or relative of the little girl out getting ice cream one afternoon.

With the right music and setting . . . it could take on a whole new meaning . . . and Hollywood has played on this and will continue doing so . . . because we love it!

Leave me a comment if you have any photographs like this of your family . . . or if you found it creepy. I would like to know your thoughts. Just be kind, I will not allow rude or crude comments on my website.