Can A Book Shape Your Life?

I’m not talking about self-help books . . . I’m referring to a novel.

I would think many of you are remembering how the Harry Potter books by J. K. Rowling got your children interested in reading. Maybe you were one of those children.

That series captured more than a generation of fans, All age groups were affected. Parents and grandparents right along with their children and grandchildren. It gave them something to read together and discuss. Then there were the movies . . . and I would venture to say hundreds of thousands of households throughout the United States have the books and the DVDs. It may be more like millions, but I don’t want to exaggerate. 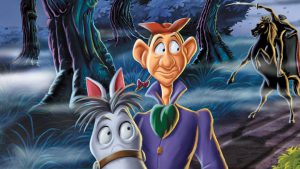 Well, I’m of a different generation . . . I’m not denying my interest in the Harry Potter books and DVDs. I have shared on several occasions my interest in The Legend of Sleepy Hollow by Washington Irving. Yes, it is an old short story that was originally published in 1820.

My brother had an illustrated version of it. I continuously asked to borrow that book to read over and over again. Usually at this time of year. There was something about it that captured my imagination. And, to this day, I read it every Halloween after handing out candy to the trick-or-treaters who come to my door.

It has become a tradition for me.

I was talking to my brother the other day and the topic of Ichabod Crane and The Legend of Sleepy Hollow came up. I told him about a previous post I wrote about Ichabod Crane and what really happened to him that fateful Halloween night. It is something I think about. There can be thousands of explanations. I didn’t draw any conclusions, but I did ask my blog visitors what they thought . . .

Yes, this book from my childhood had an impact on me and perhaps my life. I always go back to reading it year after year. It did capture my imagination and it helped me become a better reader and to dig into the meaning behind the words.

The fact that it was published in 1820 gives an indication that the vocabulary wasn’t streamlined for a child . . . I did struggle to get through the beginning:

I knew this story was to give me rewards at the end . . . a great chase . . . a heart pounding life or death race . . . Every year I return . . . with a hot cup of cocoa to savor Washington Irving’s prose and revisit Sleepy Hollow.

Here are some links in case you want to get into this legend and see if it captures you or your children in the same way it captured me. It is a legend and I believe Washington Irving did visit Sleepy Hollow and he did find something special about the place that captured his imagination . . .

I am disappointed there is no DVD of this wonderful classic. But, it is available in VHS.

Yes, I agree this was rather long, but I do hope you enjoyed it and will seek out the books to share with your family and friends.

You can always find a PDF of The Legend of Sleepy Hollow on-line.