The Brown Lady Of Raynham Hall

The photograph of The Brown Lady of Raynham Hall is familiar to most everyone.  It is included in everyone’s collection of ghostly apparitions.  Many believe it is authentic, but there are always those who believe otherwise.

I’m no photography expert, but I am open in believing it is real and I’m also open to the possibility of light getting into the camera or there being some sort of double exposure.  However, this doesn’t explain away the actual sightings many have claimed to see around Raynham Hall. 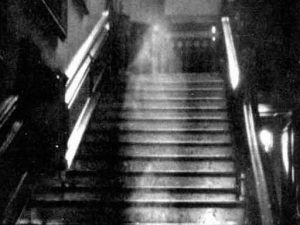 The first was in the early 1800’s by King George IV.  He said he saw a woman dressed in a brown dress standing next to his bed. He remarked that her skin was pale and her hair disheveled. During the Christmas holidays of 1835, Colonel Loftus saw a woman wearing a brown satin dress with a pale luminescence around her.  He further described her as having her eyes gouged out.  Captain Frederick Marryat and two friends encountered “the Brown Lady” in an upstairs hallway carrying a lantern in 1836.  It is reported she grinned at the men in a “diabolical manner.”

Who is this “Brown Lady”?  Why is she haunting Raynham Hall?

She was Robert Walpole’s sister (Robert Walpole is regarded to be the first Prime Minister of Great Britain) and the second wife of Charles Townshend, 2nd Viscount of Raynham and residents of Raynham Hall in Norfolk, England in the early 1700s. Rumor has it that before Dorothy married Charles, she had been the mistress of Lord Wharton, 4th Baron Wharton, an English soldier, politician and diplomat

Now Charles Townshend was known for his violent temper and accused his wife of adultery. It is likely he strangled her right on the staircase of Raynham Hall in 1725 and buried her.  It is a tidy little story and ties the picture in nicely for this legend, but more rumors suspect the funeral was a hoax and Charles locked his wife away in a remote location on the estate.  It is believed she died of small pox in 1726 and others believe she lived out her life locked away.

What is a legend without contradictions? Why are these sightings so rare?  Is the photograph a hoax or proof that spirits walk among us? Was “the Brown Lady’s” life cut short by a jealous husband or small pox . . . or was she locked away for the remainder of her life in the place she now haunts?

I suppose “the Brown Lady” will forever be shrouded in mystery . . . until someone holds a séance at Raynham Hall and Lady Dorothy Walpole Townshend comes forward to tell her story.  Actually, I’m surprised it hasn’t been done.

I sometimes wonder if not knowing is sometimes better than actually knowing the truth of a legend. It would truly be a shame if this was just a photographic anomaly. Photography in those days was in its infancy. It would be interesting to see if there have been other photographs, more recent photographs depicting the fine lady in brown.