I suppose most ghosts are uninvited.

Janet moved into her new apartment. All seemed well with the landlord bringing in a refrigerator and an antique dining table and chairs. 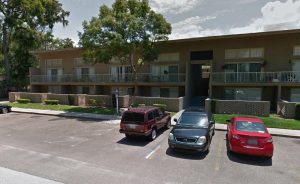 Immediately, my thoughts are to cleanse the whole apartment and especially the items brought in by the landlord. But Janet was more concerned about getting her belongs moved in and set up.

Everything seemed fine at first, but one morning she walked out of the bedroom and noticed her living room furniture had been rearranged. She wondered if the landlord had been in her apartment . . . or something else.

She had a friend in the building, Sara, and ran over there . . . unnerved by having her living room furniture rearranged.

Immediately Sara thought of poltergeists as in the movie, but didn’t say anything.

No way could Janet have done that and no way could Sara and Janet take them down without having the chair configuration topple down. They called the landlord.

The landlord and his crew set things to right, but Janet felt as thought something paranormal was going on and debated about moving into another apartment in the complex or finding an apartment elsewhere.

Janet contacted Sara and in turn contacted the landlord.

It was time for the landlord to come clean about the apartment. Something was going on and now Janet wasn’t feeling safe at all.

When the apartment complex was first built there were injuries reported and the builder plunged to his death while inspecting the roof.

It was unknown if the builder committed suicide or he slipped and fell to his death. But, construction was stopped for several years.

There was talk that the apartment building was built on an old cemetery. That was later proven to be false.

Eventually, another developer took over the project and the apartment complex was completed with two more wings added.

As far as the residents were concerned, they had no disturbances as experienced by Janet.

So, it was pretty much concluded that Janet was the cause of these activities.

Janet knew something paranormal was going on. No way would she rearrange her furniture and forget she did it . . . and the chairs on top of the dining table . . . and knocking over the refrigerator and emptying out the cupboards and drawers in the kitchen . . . She couldn’t imagine being responsible for all of that.

One evening while Janet was preparing for bed, her bedroom door flew open. Scared, Janet called Sara and the landlord to come over . . . she heard footsteps walking throughout the apartment.

The landlord called out to Janet to open the door . . . not hearing a response used his key and let Sara and himself into Janet’s apartment calling out to her.

As they walked into the living room, they heard the banging of doors slamming . . . bedroom doors and bathroom doors . . . Both Sara and the landlord felt a cold breeze pass them, open the front door and pass through . . .

Janet, finally came out of the bedroom . . . the landlord and Sara were standing with shocked expressions on their faces and basically speechless . . .

Over coffee, they concluded that something was definitely going on in that apartment. And maybe, just maybe it decided to go . . .

As strange as it may seem, it did leave . . . Janet did move out of the apartment complex . . . Sara still lives there. No one has experiences any ghostly encounters.