Chased Out Of An Old Cemetery

Many of you may find cemeteries to be creepy . . . but they don’t have to be.

Some people have some very interesting ideas about ghost hunting and being right in the middle of the action, but would you set up camp next to a cemetery?

I have a respect for cemeteries and don’t get all creeped out by them, but when Larry was about 10 or 11 his parents rented a cabin for the weekend. It was small, next to a lake and had room for the boys set up a tent near the cabin. That evening they cooked their dinner over an open fire and told ghost stories.

Larry’s parents told the boys they could sleep in the cabin, but they wanted to stay in the tent. The ghost stories didn’t scare them and they were looking forward to star gazing before going to sleep.

Strange Sounds In The Middle of The Night

About 2 AM Larry was awakened by the sounds of someone crying. It wasn’t his brother, it seemed to be outside of the tent.

He decided to ignore it, because he didn’t know what to do.  Then he wondered if it was someone who got lost,  maybe he could help.  He woke up his brother so he wouldn’t have to confront the crying stranger alone.

“Pete, there’s someone crying outside our tent,” Larry whispered while shaking his brother.

Pete listened.  “I don’t hear anything, go back to sleep.”

Larry couldn’t do that. He listened, but the crying person must have moved on.  He did finally  go back to sleep.

The next morning after breakfast the family decided to do some exploring of the area.  They found an old abandoned cemetery a few yards away.

This was exciting for the boys and the parents were equipped with cameras and tape recorders, along with other ghost hunting equipment.

Their mother was talking about some of the old graves that dated back to the 1700’s.  “This is a really old cemetery, I wonder why it was abandoned.”

Their father answered that it looked full.  They may have run out of space and instead of enlarging the old cemetery they may have set up another one closer to town.

It all seemed logical and matter of fact to Larry. He didn’t mention the crying he heard in the early morning hours.

Chased Out of The Old Cemetery

Pete nudged Larry and pointed at a dark figure at the very top of a huge rock monument.

Both boys stood riveted to the spot, until the image took flight and was headed towards them.  They ran with all their might to get out of the path of the flying apparition.  Their mother saw the apparition and ran out of the cemetery leading the way, followed by their father.

Larry remembers the sound of running footsteps behind them, but he always remembered the thing was flying. It didn’t make sense until he turned around and saw his parents behind him.

They ran all the way back to their camp and went inside the cabin.  Larry stayed on the porch for a minute and looked back towards the cemetery and the path they took.  He saw a faint image of a man standing quite a distance away.

Pete had a pair of binoculars and looked toward the image.

“He looks like he just came out of the grave,” Pete said handing the binoculars to Larry.

When he looked, the image was gone.

The family did pack up and go home. They weren’t scared, but thought there little adventure in the graveyard wasn’t such a good idea. It is a hallowed place and since they were chased away, they didn’t want visitors.  They did wonder if they had been disrespectful in any way.  Maybe it was taking pictures or tramping around.

What Do You Think About Ghost Hunting In a Cemetery?

There are some who believe ghost hunting in a cemetery isn’t a good idea.  There are always abandoned buildings and plenty of places that are known to be haunted.

I don’t find cemeteries to be a problem since I regularly put flower on graves, but this is my job, I do talk out loud, making  comments about the flowers and at times I set flowers on various graves just to give the area a bit of color. It’s my little gift to spirits that may be hanging around.

All last week I thought about posting here . . . but with the turn in the weather to HOT . . . and playing around with paper strips . . . time just flew by.

It’s fun to learn something new and to be motivated to finish projects I’ve started . . . and never finished. 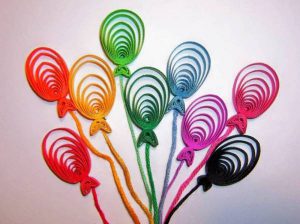 I’ve been giving my paper crafting a lot of thought and have been doing a lot of research, too. Just when I think I’m getting a handle on the topic . . . something new is added and blows me away. So, I’ve been busy learning . . . getting confused . . . refocusing . . .

My learning curve is as loopy as the paper strips I’m curing and twirling . . .

And I got thinking that maybe focusing upon a theme would help . . . it has to a degree . . . but it’s much like window shopping. You’re focused until something catches your eye and attention and you’re off chasing butterflies . . .

Although it officially hasn’t arrived . . . but the weather has given me summer heat . . . that I’m determined to enjoy . . . under the air conditioning.

I do run my errands early in the morning . . . working on that schedule to be home when the heat of the day sets in. I’m basically a fair weather girl. I like to be comfortable . . . and a bit cooler is preferred.

In my research . . . I came across a woman who makes miniature food charms . . . and one of her very popular pieces is s’mores . . . she’s made the graham cracker charms and chocolate charms and marshmallow charms, but the completed s’mores is what sells out . . .

I’ve posted lots of s’more recipes in the past . . . but what is so great is coming up with your own combinations . . .

I’ve had one where you put the ingredients in a sugar cone/waffle cone wrap it in foil and set it on the grill or in the oven . . .

So, far that one seems to be my favorite because you can make them throughout the year. And they’re not all that messy . . . well . . . yes they can be. 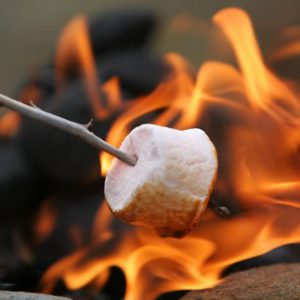 And, this does get me thinking about the taste of summer . . . and it may very well be the original version of s’more . . . The one we grew up on . . . the one that everyone knows and loves . . . Every well-planned camping trip includes a box of graham crackers, Hershey chocolate bars and a bag of marshmallows.

And while driving to your destination . . . visions of a camp fire come to mind and making s’mores . . . and more importantly visualizing taking that first bite of your gooey s’more . . . being careful not to have the whole thing slide into your lap or down the front of your shirt/blouse.

Yes, indeed this is a common taste of summer that we crave from year to year . . .

There is something positive to be said about the traditional way of making s’mores . . . and creating your own variation on them . . . that brings something special to your camping trip or outdoor cookout . . . and don’t forget the ghost stories and urban legends.