Is That A Haunted House?

You’re driving down a road in an older part of town.

You spot an interesting old house. 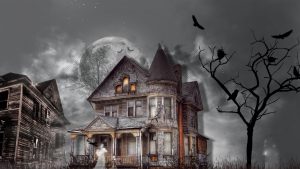 His friends joked about it being haunted. Oh yes, everyone knew about the stories, but being a skeptic, Sam dismissed it as paranormal poppycock. He bought the house at an excellent price in an excellent location. It was definitely a dream come true. He was a homeowner!!

His friends helped him move in. It was a busy day for Sam . . . he took all the joking and ribbing about his house being haunted in stride . . . but after his friends left . . . he wasn’t too sure. Sam did fall asleep on his couch . . .

He woke up with a stiff neck, but went up to his bedroom . . . stretched out on his bed and fell asleep.

About two or three in the morning, Sam heard a loud thump . . . it seemed to be coming from downstairs . . .

He was sure it was his buddies who helped him move in. They probably returned to scare him. No way was Sam going to fall for that!!

Sam decided he was going to stay in his bed and let them come to him . . . he reached for his hockey stick, but it wasn’t where he knew he left it . . . He shook away the drowsiness of sleep. He waited . . . tried to clear his mind. Sam realized he was holding his breath. He was listening . . . and he felt his whole body tense up.

He felt a chill. He was sure the room was getting colder. He tried to get out of bed, but couldn’t move . . . something was holding him down . . .

If this was a dream, then Sam was determined to control it. All he had to do was turn on the light, the lamp on the night table . . . Just reach out . . . Sam scolded himself. Shake it off! There’s no such things as ghosts.

Oh my gosh! Sam just realized . . . whatever it was WAS in the bedroom with him and it was holding him down!!

Sam threw back the blankets and reached for the light. The closet door was open — he reached for his hockey stick . . . and crept down the stairs. He noticed he was tip-toeing. So much for being a skeptic . . . he smelled the aroma of coffee. There was a bang of a heavy skillet being put on the stove. He could hear the sizzling of bacon . . .

He was going to rush into the kitchen with hockey stick in hand in a menacing gesture to catch his buddies in the act . . . of cooking breakfast . . .

Sam found himself singing along with her, “Everything’s going my way . . .”

He set down the hockey stick . . . he heard the cracking of eggs.

He heard the last line of the song again, “Everything’s going my way . . .”

What? Sam wondered. If everything’s going her way . . . what does she mean?

This was his house!! He picked up his hockey stick walked into the kitchen to confront the intruder.

He flicked on the light.  Nothing.  Just the lingering aroma of coffee, bacon and eggs.  And the faint sound of humming . . . and the bump, thud, scrape echoing as it went up the stairs.

Even for a skeptic, it wasn’t difficult for Sam to realize he did indeed have a ghost living in his house . . . and his friends were right . . . he bought a real haunted house!

Just to rub salt in the wound a little . . . Sam realized how his ghost got the upper hand?  He was awake, out of his comfortable bed, branishing a hockey stick in an empty kitchen during the wee hours of the morning.

Now Sam was fully aware of the meaning of the song lyrics:  “Everything’s going my way!”

Was that a chuckle coming from the bedroom?