Dolls Creep Me Out

I may not be alone — dolls creep me out.

I felt this way before Chucky! There has always been something creepy about them. 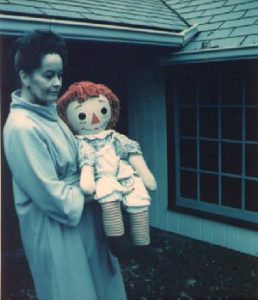 But a Raggedy Ann doll?  What could be creepy about it?

It’s not the doll, but what’s in the doll.

The story of Annabelle is well known, but for those who may not know I’ll give a brief history. In the 1970’s a woman bought a Raggedy Ann doll at a hobby shop for her daughter’s birthday. Her daughter was an adult and a nursing student. It seemed lots of young girls liked having dolls and stuffed toys on their beds — perhaps a connection to their childhood and home. And, I remember how popular these dolls were to make in all sizes.

As you can see from the picture above, Annabelle was a fairly large Raggedy Ann doll.

As the story goes, two nursing students shared an apartment and the Raggedy Ann doll was a prominent figure in the house. As long as it was a doll and behaved as a doll, everything was all right, but it didn’t.  There were “messages” written on parchment paper — which the girls did not have in their apartment. The doll would move from one bedroom to the living room . . . and was seen standing on her own.

Of course, this frightened the girls and they consulted a psychic.  They were told how a little girl, Annabelle, died on the property and her soul was in the doll. They were also told that the little girl wanted to stay and live with the young nursing students. They agreed and were very sympathetic to the story.

As time passed, the doll’s behavior got more erratic and violent until the Warren’s were called in and the doll had to be removed. The doll had a demon inside, not a child. This demon was biding its time until it would eventually possess one of the nursing students.

This possession thing is what creeps me out. I try not to think about demons, but they are very much a part of the paranormal as angels. And, too, often they are encountered in antiques.

We, as collectors, have a kind of romantic attachment to stories and wanting to preserve the old, but we do, at times, encounter things that we can’t handle or don’t want to handle.

I’ve never really liked puppets or marionettes.  I thought they were just creepy. My brother got a Howdy Doody Marionette for Christmas one year and I stayed away from it.  Gary got good at manipulating the strings and having him walk around and up and down the stairs and even do a little dance, but I wasn’t amused, I was afraid of it — it just wasn’t natural.

Throughout the day she kept hearing something in Gary’s room. She thought maybe there was a mouse in the house, but all she saw was that marionette.  She studied it as it seemed to study her each time she went into the room.  She moved it in the closet and it returned to the desk.

She got a paper bag out of the drawer and put Howdy Doody in it and put it in the trash. When my brother and I came home from school, she had some cookies for us.  We did go out to play for awhile, but after dinner when we were doing our homework, nothing was said about the missing Howdy Doody doll.

I asked my brother about it and he just shrugged and said, “One day it was gone. I was glad to see it go.”  Then he leaned closer and said, “You were right, that thing was creepy.”

I hope you liked this post about creepy dolls — maybe you have a story or two of your own. I’d love to hear from you in the comments below or you can email me: admin@twocansonastring.com