Ghost In The Rocking Chair

Natalie and Mark found an old rocking chair on the side of the road.

It was old, but in perfect condition. 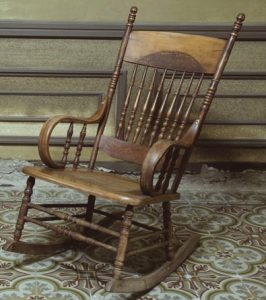 They picked it up, put it in the back of the truck and continued on to town to run their errands.

You may be thinking that picking up the rocking chair was an ill-advised decision for Mark and Natalie. I agree.

There are many items from furniture to jewelry that have been known to be “haunted.”

But . . . Natalie and Mark’s story turned out to be different.

Yes, they did pick up the rocking chair and set it in the bed of their truck and went on about the business they had in town.

When they returned to their truck . . . the rocking chair was gone . . . evidently someone stole it.

A few weeks later, when Mark and Natalie were returning to town, they once again saw the rocking chair on the side of the road.

They didn’t stop to pick it up, but agreed if it was still there on their way home, they’d pick it up and take it home.

Natalie thought it was an omen that the rocker was meant for them. She knew where she wanted to place it in her house.

I don’t know about you, but I’m getting a creepy feeling about that rocking chair — the same creepy feeling I got when Natalie and Mark were telling me of their experience.

Yes, the rocking chair was still there and, of course, they picked it up, took it home and placed it in their home.

That night, Natalie couldn’t sleep. She made a hot cup of cocoa, sat in the rocker and relaxed sipping her cocoa and thinking of planting her garden and thoughts of burning down their farmhouse.

Disturbed, Natalie immediately got up, cleaned her mug and as she glanced over at the rocking chair on her way upstairs, she saw an old woman with white hair rocking in the chair and laughing . . .

She felt momentarily paralyzed . . . she called to Mark, but no sound escaped her lips . . . Natalie couldn’t remember what happened, but when Mark woke up, he found his wife sleeping on the staircase.

Over breakfast she told Mark what she remembered of the night before.

They decided to move the rocking chair out of the house.

They completed their chores about the farm and when they returned to the house . . . the rocker was inside and rocking . . . They both swear they heard laughter.

He then dug a hole and put the pieces in it . . . only to find the rocker back in the farmhouse.

Mark and Natalie were frightened. They had no idea what to do next . . . except leave their home . . .

They did contact a psychic. They didn’t care if the psychic believed them or not. They were desperate to get rid of that rocker . . . and save their farm. Natalie was sure that old woman ghost was going to burn down the farmhouse and they didn’t want to be inside when she did it. 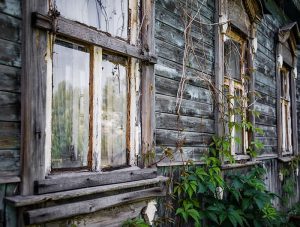 Well, the psychic believed their story. She had experienced other “haunted” or “possessed” items and knew a simple cleansing wouldn’t work for them. She contacted a priest for advice.

He would not perform an exorcism. He didn’t want to have anything to do it. The psychic and the young couple felt as though the priest knew more than he was telling them. They had no other choice but to sell the farm . . . and take what personal belongings they could pack and store in a storage unit until they sold the farm.

Fortunately, they did sell the farm . . . with the rocking chair inside . . .

They never picked up anything on the side of the road again . . . but a few years later, they drove by the farmhouse . . . only to find it had been burned to the ground.