I met Carl and Brenda at my local coffee shop.

They have lived in 4 different houses and each and everyone has been haunted. They believe since both of them are sensitive to spirits that they may be attracting them into their lives. 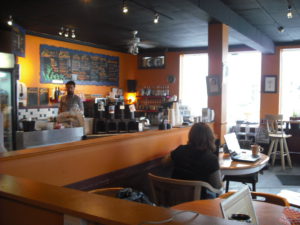 Carl recalls seeing a ghost when he was just a child. He went into his bedroom one day to play with his toys and found a little boy playing on the floor with his cars. He went running to tell his mother and when they returned to his room, the little boy was gone. As the years went on, he would see spirits from time to time and accepted them as his normal day to day routine.

They were now living in their 8th house in as many years and shared with me their story.

Shortly after they were married, they moved into Carl’s grandmother’s house.

He didn’t want to bring his new bride there, because his grandmother had a strong dislike for him. It wasn’t anything he did, she just never liked him. Brenda loved the old Victorian and thought it was just perfect for them and for the family they wanted eventually.

It didn’t take long for Grandma to make an appearance — maybe not physically, but by turning up the burners on the stove or changing the temperature of the oven to ruin any meal Brenda made. She was able to interfere with the television by changing channels and turning it on or off. These were not necessarily dangerous pranks, but annoying. When Brenda and Carl were able to save enough money, they moved out and rented another house.

They moved into a duplex.

For the first few months, everything was calm and peaceful, but soon they found something was messing with the thermostat on the heater. At night it would get well above 80 degrees in the house. They would turn it down to 60 before going to bed. Brenda immediately thought of Carl’s grandmother and wondered if she followed them, but she was able to cook a meal without interference in the duplex.

Carl came home from work one day and found Brenda unconscious in the kitchen. She claims she was pushed and hit her head on the counter.

Brenda became more and more uncomfortable living in the duplex. She would hear loud music coming from the attached unit next door when no one was home. When the place became infested with rats, they moved.

Carl and Brenda found a lovely townhouse by a lake.

It seemed perfect for them. It was as though they were on a second honeymoon. There were no disturbances in the house or on the trails around the lake and the wooded area.

Things got a bit uncomfortable for them when some strange neighbors moved in next door to them. It started with their car being scraped while it was in the carport. Next there were strange odors coming from next door into their townhouse. The door to the bathroom would not stay closed. It was always coming opened, even when the door was locked. Next, they experienced shadows moving through the walls and drifting up to the ceiling watching them.

It became so uncomfortable for them that they had to move.

They found a newly built house that was a model home.

They believed this would be perfect for them. No previous owners and no wall that was shared with a neighbor. It didn’t take long for there to be disturbances. Drawers were spilled out in the kitchen. Water would turn on at various times day or night. The lights would flicker. They heard a telephone ringing continuously. There were also loud arguments between two ghostly men. They would hear a gunshot which ended the argument followed by running feet and the slam of the front door. This scenario played out several times a week.

They did research on the house and found that one of the owners was murdered by the contractor in the back bedroom Carl used as an office. It was always disturbed with desk and file drawers being opened. Pens, paper and paperclips were thrown off the desk and scattered around the room.

They were able to break their lease and moved out only two months after moving in.

They moved back into Carl’s grandmother’s Victorian house. They called in a psychic to bless the house and to also do a reading for them. They did want to contact Carl’s grandmother to ask her permission to live there and to raise their family. Brenda and Carl planted flowers and also a vegetable garden. The landscaping was beautiful when they finished — similar to how he remembered it when his grandmother lived there.

Carl’s parents kept the grandmother’s furniture in the house and used it as a guest house for out of town guests. They didn’t want to sell it and didn’t want to rent it — other than to Carl and Brenda, which they would eventually inherit if they wanted it.

The psychic was able to find out that the Grandmother didn’t like men since she learned her husband of fifty plus years had been cheating on her since the beginning of their marriage. When she saw Brenda fixing dinner for Carl, Grandma decided he didn’t deserve a well cooked meal and messed with the oven and stove. She also didn’t believe he deserved a comfortable night’s sleep and messed with the thermostat. She did what she could to get them out of her house and make Carl’s life miserable.

Carl told his grandmother how sorry he was that his grandfather was such a womanizer and treated her so poorly, but he assured her that his father and he did not share their father’s and grandfather’s behavior. He wanted to prove it to her by living in her house with Brenda and their new baby who would be born in a few months.

Fortunately, the baby was a girl and they named her after Carl’s grandmother.

Everything seems to be working out well for the couple. They know the older woman is around. They have seen her sitting in a rocking chair in the nursery singing to the baby while she sleeps.

They have noticed things moved in the house, but Brenda is able to cook without interference. The thermostat remains where it was set.

They’re finding it is possible to live peaceably with a resident ghost.