I don’t use a Ouija board or have one in my home.

I believe they are a portal to trouble. There are many who agree with me and, of course, there are those who do not. It’s fine to have your own beliefs. Just as we’ve all had our own experiences. 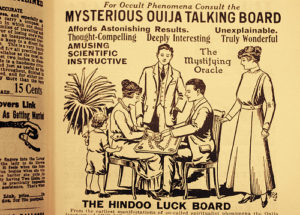 And, since it is getting close to Halloween, there will be many having parties and a Ouija Board or two will make an appearance … Or it will be hush-hush and some will be invited to “play” after the party.

Whatever you believe, as I said earlier is your business …

As you can see from the vintage advertisement, Ouija boards have been around for a long time. It was introduced as a parlor game, as  merely an item to amuse your guests.

Over the years the Ouija board has been sold in toy stores and occult stores. You can buy them on-line or find them just about everywhere. I’ve seen them in trash barrels and also pitched outside.  I don’t know if someone had a bad experience or they thought it would be funny to have a Ouija board cast out on their front lawn — maybe to see if anyone would take it home.

And, there have been those who make their own to use . . . I’ve seen them made from pizza boxes and strips of paper . . . shot glasses have been used as the  planchette.

But … we must now get to our real ghost story …

When it was returned to him, he believed it was haunted with a variety of spirits. He first recalled hearing noises:  knockings, bells, chimes, scratching, cards being shuffled, nibbling — as a rat chewing on paper, coins being dropped and growls. He also noticed items disappearing and then reappearing in places where he had previously searched.

He left it on his coffee table since its return and a neighbor reported hearing loud poundings, screams and what she believed was a heavy metal band rehearsing. There were guitar riffs that were repeated over and over again and drum rolls.

Over time Lyle could feel the presence of someone watching him while he was in bed. He thought it was an old man wearing a hood and by his side as an old woman, also hooded. He also heard what sounded like a chorus of children singing nursery rhymes, but they weren’t any nursery rhymes he remembered. He found the Ouija board would move around and set itself up in other locations. He started experiencing headaches and weakness which made him tired all of the time.

Lyle eventually threw the Ouija board out in the trash . . . only to have it set up again in his house.

This made the activity escalate. He would find large blood splotches on the Ouija board. He could feel cold spots in various places around the board. He also thought he saw an ectoplasmic mist coming out of it. He was becoming frightened to have it in his home, but also felt as though he couldn’t get rid of it.

Lyle never used it, even when he first acquired it. He bought it and loaned it to friends. His original idea was to have it out as a conversation piece. But now, his friends avoided him. They didn’t visit him — nor was he invited to their homes. When he’d see friends at a local bar, restaurant or around town they moved away from him. Even when he’d call out to them, they wouldn’t aciknowledge him, but walk swiftly away. Some old friends told him to leave them alone.

He was so disgusted with how this Ouija board ruined his life that he burned it. He thought the ashes wouldn’t be able to put themselves back together.

Everything was going well for a few days until his nephew brought him a Ouija board.