Have You Seen A Ghost?

A great image of ectoplasmic goo that is transforming right before our very eyes into a human form. 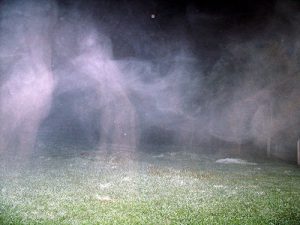 I was over on Twitter the other day and a “person to follow” suggestion was a woman author with a menopausal character who sees ghosts. I find it an interesting concept, but didn’t catch her name nor the title of her book. I’m wondering if she’s a “ghost whisperer” or goes out ghost hunting . . . I can only image this woman in a retirement community in Florida with all these ghosts hanging around waiting for a turn to talk with this menopausal woman.

Or . . . perhaps it will be similar to Murder She Wrote where there were all these murders taking place in this little town . . . until Jessica had to move along and travel . . . It just got too suspicious to have murders taking place around one individual . . . I suppose we do attract our interests . . .

The center left image looks a bit like Jack Skellington from the Nightmare Before Christmas. It may be his stance and those long legs.  It looks like he’s wearing a suit or tux.  Does the head look like a skeleton’s head to you?

Then there’s the image on the left.  I think it’s too big for Sally (keeping with the film theme).  And what is approaching “Jack” from his left?  It looks like a man wearing a hat.  Are they shaking hands?  The image on the left seems to be carrying a baby.  Do you see them?

Is that a portal they’re standing in on the grass?  Does that look like a circle to you?

Gazing at images and gazing through hours of video recordings is much like cloud watching or trying to see through the fog.

Just on the off chance that you capture something supernatural to show your family and friends and anyone else who cares to see.  And, for no other reason than it amuses you.  As it does me.

I remember as a child going outside and watching the fog roll in.  Years later there was a movie called The Fog.  Had I known that then . . . and what was in the fog . . .

Have you noticed when you’re quietly communing with nature, thinking of nothing in particular, just feeling at peace and so very calm is when you see something . . . something out of the corner of your eye?

My grandmother had this huge front porch where we would sit after dinner.  The only problem was other neighbors did the same and there were people walking by who would stop to chat.  Quiet contemplation would have to wait until everyone settled back into their homes or were content to be quiet on their porches.

I tried to be quiet so I wouldn’t be sent off to bed, but that would have been all right.  I had the front upstairs bedroom with a lovely window seat where I could sit and watch out the window.  There was the apparition of a man riding in a wagon like in Little House on the Prairie.  I enjoyed hearing the clip-clop of the horse’s hoofs and the creaking of the wagon as it rolled down the street.

It’s times like that when I set up my camera on a tripod, turn it on and wait.

I don’t believe I have to go to a known “haunted” place to see what there is to see in the spirit world.  I can do it from the comfort of my own patio.  If I don’t see anything, maybe, just maybe the camera will pick something up.

It’s more difficult for me to go for a walk with camera in hand, but it’s not out of the question.  Sometimes we have to go to the “ghosts.”

Ghost Hunting, in whatever form you choose is an enjoyable pastime.  At the very least it would be nice to have an infrared camera for your night time picture taking and video recording.  I also like one that I can use in the daytime.  Not two cameras, but one that does both.  Ghosts, in my experience, don’t only come out at night.

Here are a few examples:

I know, I’ve pretty much broken from my tradition of telling ghost stories and got all these random thoughts in the mix . . . but when one is looking for “ghosts” or unusual paranormal activity, one does need to clear one’s mind . . . or ramble on . . .

Kind of the spooky thing is . . . a ghost will pop up and make a comment about something I was thinking about . . . or I’ll get a thought in my head about something else — although related . . .

Which reminds me of a place in Alabama a friend of mine told me about . . .

I believe it was once a restaurant with a bar . . . The woman who owned it loved the paranormal and had more money than common sense . . . She collected items from known haunted places as well as from places where crimes took place.

I’m not talking about trinkets . . . I’m talking about the actual bar from a haunted tavern . . . An old teller’s station in a bank where a robbery took place back yonks ago . . . and, of course, people were killed . . .

This woman welcomed all kinds of odd things into her restaurant . . . along with any paranormal “ghosts, gouls or gobblins” that wanted to come along . . . and stay for awhile.

And, yes . . . there were ghost stories from the workers who had the opportunity to work there. One of them I really like . . .

Of course, in this same restaurant, there was a basement with items the owner bought, but didn’t have a place to put them . . . well, except in the basement . . . There were always sounds coming from there . . . usually whispering and sometimes loud bangs . . . and many customers and work staff alike had seen ghostly apparitions running through the dining hall . . .

It was a lively place. Everyone was sad when the place closed its doors. A friend of mine and I would muse about buying it and reopening it . . . I think it had three stories . . . Initially, I thought I’d move there and live at the very tippy top of the building . . . but then I thought better of it . . . plus the woman had no interest in selling . . .

I thought, too, it would make a great museum and use all the space to display the whole collection of spooky stuff. I would enjoy archiving it and making a little booklet telling the tales from each artifact as well as the stories from those who saw ghosts, ghostly apparitions, heard sounds . . . or just got a creepy feeling.

Well, nothing came of this . . . but I still think about that place from time to time.