I Got Bitch Slapped By A Ghost!!

I’m confident that many of you who have dabbled into the paranormal have had an experience or two that either still shocks you . . . or tickles you . . . and perhaps a little bit of both . . .

This Real Ghost Story happened quite a few years ago. I found it amusing and thought you may enjoy it as well. 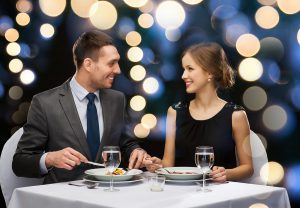 Hey!! It’s not every day you encounter a ghost who gets offended and reacts in a non-ladylike manner . . .

I was in a restaurant with a friend, who is quite psychic.

I noticed a woman who kept rubbing her right foot on the carpeting . . . actually she did have her shoe on . . . and it seemed as though she was trying to get something off of it — perhaps she stepped in something . . .

This seemed odd. Not just the behavior, but that she was there one moment and gone the next.

I decided to concentrate on my meal and be polite to my dinner companion — Michael. Then, once again I saw that woman was back rubbing her right foot on the carpeting. I mentioned it to Michael.

He was so cool that he immediately turned around. Oh good grief!! I couldn’t believe it!!

Now, if you want to know something, just ask . . . but not in the middle of dinner — oh good grief

Michael asked the waitress if she knew anything about the history of the land before the restaurant was built. She was new to the area and asked the manager to come to our table.

And the ghostly apparition had evidently stepped in it . . . and was now cleaning her shoe.

It struck me as funny!

I burst out laughing!!

Now, if I had been embarrassed by Michael’s behavior . . . mine took the prize! But more than that, the ghostly woman, in her fine attire of two centuries ago came up to me . . . I could feel the chill of her icy stare . . . and without warning — all right, that isn’t true . . . I knew the woman was upset. She slapped me!! That’s right!! Slapped me right across the face . . . an open handed “bitch slap”.

Yes, I was shocked! But, more importantly you’re probably wondering if I felt the slap . . .

It felt as though I was hit in the face with a bag of ice.

Michael could see the imprint of the ghostly hand print as my face reddening . . . Yes, from the slap . . . and perhaps embarrassment, too.

It was absolutely amazing . . .

Michael was caught in one of those catch 22 situations, be consoling to me or be astonished that a ghost
“bitch slapped” me.

“Go ahead, Michael, it’s all right,” I said calmly.

And I was waiting for Michael to open the door . . . I’m not all that women’s lib . . . I enjoy gentlemanly gestures.

I heard a laugh . . . a laugh that echoed through the air long after the apparition disappeared.

I didn’t join in her merriment . . . Michael looked so pathetic . . . and I was still chilled from the slap.

I often wonder what the other patrons in the restaurant thought while all of this was going on — the apparition cleaning her shoe, my being slapped, Michael being goosed . . . Did they see anything paranormal . . . or just thought Michael and I were odd . . .

In retrospect . . . what did I learn from this experience?

For one, don’t tick off a ghost by laughing at her after stepping in a “cow patty”.

And, there are ghosts who will interact with you . . . maybe not in a kind manner . . . (just ask Michael) . . . but then again, if I had been more kind . . . Being insensitive to a ghost is rude . . . especially one who was all dressed up and obviously upset by her situation of trying to clean off her shoe

I didn’t know anything about her. She may have been “someone” in this town, so . . . how dare I laugh at her unfortunate situation . . .

Well, I hope you enjoyed this Real Ghost Story and share it with a friend or two.