I met some friends at our local coffee shop. Some dabble in ghost hunting — some more serious than others.

I like hearing of their ghostly adventures . . . and I’m rather fond of the blueberry muffins. 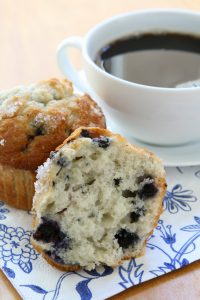 My friend, Barbara brought along her nephew Joel.

After the introductions, Barbara told Joel to start at the beginning.  Joel is a college student.

He decided to give us a description of the room he was in when his unexpected visitor appeared.  The back room, they use as a TV room was added on to the back of the house about five years ago.  From the living room, there’s an archway and you step down three steps into the back room.  There are windows across the back of the room and a door on the right to the backyard.   There’s a couch under the windows, a loveseat is against the wall to the right with the back door and to the left are bookcases and a couple of chairs with a table and lamp between them.  Mounted on the wall to the right of the archway is a widescreen TV.  There is a coffee table in front of the couch. Nothing is in front of the loveseat.

Joel was standing in front of the couch, bent down to pick up the remote from the coffee table.  When he pointed it at the TV, in the reflection of the TV screen was a tall man wearing overalls and a straw hat, holding a shovel or hoe, standing behind the couch, right behind Joel.  The curtains on the windows were closed, because it was night.

Joel stood still for a few minutes staring at the man reflected in the TV screen.

He slowly turned around to see if someone really was behind him.  As happens so often, as soon as he turned his head to look, the man was gone.

Joel ran from the room, to join the rest of the family in the kitchen, looking at old photo albums.   He tells his mother, Barbara’s sister, what he saw and to his surprise she smiles and walks away.

Joel just stood there, still in shock from his encounter.  He watched pictures being passed around. There was an old yellowed newspaper article with a grainy black and white picture that he swears fell from the ceiling and landed in the middle of the table.

According to Joel, it was like the whole world stopped.  He pointed to the picture and yelled, “That’s him!”

Barbara took the newspaper clipping from her purse and passed it around the table.  Evidently, the man was found dead in his backyard, apparently from a heart attack, working in his garden.  This garden is now the TV room.

Joel’s mother had seen the gentleman several times over the years.  She usually saw him in the backyard before they added the TV room.  At times she saw him in various areas of the house — this had been his home.  She knew a man died on the property when they bought the place, but that didn’t bother Joel’s parents.

We made a point of going to the cemetery and looking up this gentleman’s gravesite to place flowers and to let him know that he is remembered.

Joel is still uncomfortable.  It will take him some time to come to terms with this unexpected visitor. He is actually no stranger to the paranormal . . . but it’s the newspaper clipping that has him creeped out.

I would feel the same way. How about you?

Leave me a comment, tell your friends about TwoCansOnAString.com and come back and visit us again soon!!