Lost On A Country Road

There are many urban legends and downright scary stories about driving down a country road — running out of gas, seeing No Trespassing signs, seeing a ghost . . .

This real ghost story is a bit different — and maybe familiar. Yes, there is a ghost involved and a cemetery — an interesting combination. 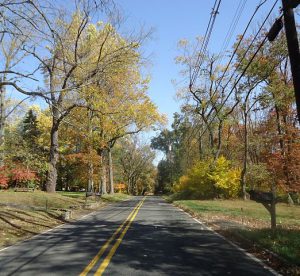 Normally, I’ve heard, ghosts don’t hang out at cemeteries. They’re busy haunting houses and hospitals, nursing homes, etc. They may be looking for closure . . . and some don’t realize they’re dead. That’s the strange thing . . . when you’re not sure you saw a ghost or not.

Yes, this is my story — one of many real ghostly encounters.

This “ghostly encounter” took place years ago — I would say 35 to 40 years ago. I was driving down this country road, lost in thought . . . and lost.

I obviously made a wrong turn somewhere along the way. There were miles and miles of farm land. Fields of I don’t know what. I did see abandoned trucks and tractors in a field here and there. An old barn falling apart. Yes, there were “no trespassing” signs scattered here and there . . . and an old cemetery. There were a few cards parked outside. There was a funeral going on. I thought I’d stop and ask for directions after the ceremony.

For some reason I parked my car, got out and began walking among the headstones.

One caught my eye, it was overgrown with weeds. I started clearing the weeds away. The date on the headstone was 1849, 100 years before I was born. The death date was my birthday . . .

I felt a chill . . . more like a tingle . . . it wasn’t uncomfortable, but it wasn’t comforting either. The name on the headstone was nothing familiar to me or similar to my name at all — we didn’t share the same initials — just the death day (my birthday) and the year (100 years before I was born).

As I was clearing away the weeds, I was basically talking to myself and wondering who this woman was and what her life was like . . . I also wondered if there was a connection — besides her death day was my birthday with a 100 year gap.

Obviously, I was a bit fixated on it — as I am now recalling my paranormal experience.

I heard a voice behind me. “Hello. Thank you for clearing away my grave.”

I thought I heard her wrong or maybe it was “her grave” in regards to being a relative.

I immediately stood up and apologized for intruding . . . but no one was there. But off in the distance, I did see a woman walking away. I ran to catch up with her.

I was so caught up in what had happened that I didn’t ask for directions, but I wanted to know about the woman who’s grave I just cleared.

The woman seemed very relaxed and spoke of “Margaret”, the woman who died in 1849 as though it was yesterday.

“It was a beautiful day and a lovely ceremony. Paul, Margaret’s husband was devastated. Their four young children — the youngest at home . . . Margaret died in childbirth. It was a girl . . . ”

My head was whirling with questions — was this woman Margaret or the daughter — but that would make her over 100 years old — it wasn’t possible . . . maybe the granddaughter of Margaret???

Would she refer to herself in the third person if this woman beside me was Margaret??

I didn’t care if this woman thought I was a bit coo-coo . . . so I just asked, “Are you Margaret? The woman who died in childbirth?”

“So . . . ” I began, but stopped. I couldn’t take in the fact that I was seeing and having a conversation with a ghost . . . So I did what I do when I’m nervous . . . I started babbling about how I was looking for my grandmother’s house which had been bought and moved out in the country. “I must have made a wrong turn and I ended up here. I found this overgrown grave and started clearing away the weeds . . . and now . . .”‘

“I brought you here.”

“You passed your grandmother’s house a few miles back. You wouldn’t recognize it, the beautiful porch is gone and I didn’t think it would be right for you to see it. Keep your memories of how it once was and the good times you shared there with your grandmother.”

I did see a ghost . . . she did do me a favor by not allowing me to see how my grandmother’s house had changed with the move . . . I suppose I did her a favor by clearing her grave of weeds . . .