All right, no surprise — this Howdy Doody Marionette Freaked Me Out.

I’ve never really liked puppets or marionettes.  I thought they were just creepy. Sometimes my dolls would creep me out as well. But I digress . . . 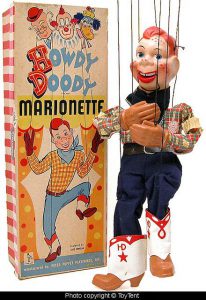 Way back in the 1950’s, my brother got a Howdy Doody Marionette for his birthday … and I stayed away from it.  Gary got good at manipulating the strings and having him walk around and up and down the stairs and even do a little dance, but I wasn’t amused, I was afraid of it — it just wasn’t natural.

Throughout the day she kept hearing something in Gary’s room. She thought at first I was in his room playing with it, but she saw me outside swinging on my little swing set. Then she thought maybe there was a mouse in the house, but all she saw was that marionette.  She studied it as it seemed to study her each time she went into the room.  She moved it to the closet and it returned to the desk.

She got a paper bag out of the drawer and put Howdy Doody in it and put it in the trash. When my brother came home from school, she had some cookies for us.  She encouraged us to go out to play for awhile, but after dinner when he was doing his homework and I was coloring in a coloring book, nothing was said about the missing Howdy Doody doll.

I asked my brother about it and he just shrugged and said, “It’s gone.”

Then he leaned closer and said, “You were right, that thing was creepy.”

Have you had a similar experience with a childhood toy?