This real ghost story hits home a bit with me and you may also be able to relate.

Sophie bought her first home after working for 15 years at her job.

The sad thing was that the room she selected for her home office felt uncomfortable and actually scared her. 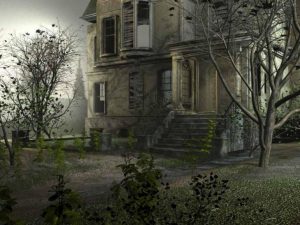 I know this does sound strange, but I have a room in my home that feels uncomfortable at times. I feel as though I’m being watched. And . . . as it turned out, back in the late 1960’s a young man overdosed in that bedroom. He didn’t actually die there . . . well maybe, but the paramedics revived him and he later died in the hospital.

As far as she knows, no one died in her house, but there was an elderly couple who lived there since the house was built and they lived out their lives in an assisted living facility. Thus the reason they sold the house to Sophie.

But something was definitely wrong. She would hear whispering voices, footsteps, smell food cooking and doors and cupboards would open and close at various times throughout the day and night.

She felt as thought the house didn’t want her there.

Even when she would leave the house to get her mail or water the flower beds or even sweep off the front porch, the door would be locked when she would return to go inside.

Fortunately, she hid a key outside and later carried a key with her whenever she went outside . . . but the whispering persisted, plus objects and even furniture would be moved around.

While all of this was going on, the elderly couple were alive and well in their assisted living accommodations. So, the previous owners were not haunting the house.

Sophie contacted a psychic to get to the bottom of this.

Evidently there was another house built on the property decades earlier and the residents of that former home were haunting her. The elderly couple were not bothered by them — either they were unaware of them or these spirits didn’t bother them and in turn didn’t bother the spirits.

So, why was Sophie so lucky to get their attention?

According to the psychic, Sophie was sensitive to them . . . and their vibrations or energy were at odds with each other . . . thus causing conflict . . .

And, if you want my two cents, they didn’t like Sophie and were going to make it uncomfortable for her.

But . . . as it turned out, the psychic helped the spirits crossover, thus leaving Sophie alone . . . but she still didn’t feel safe in her home and sold her house and bought another one where she had no paranormal experiences.

In a way I don’t blame Sophie for moving on . . . at least she made the house safe for the new buyers, but one never knows what ghostly spirits are hanging out with us.