It’s Never Too Early To Begin Planning For Halloween

And These Coffin Treat Boxes Are Great For Your Ghost Hunting Friends.

They’re not just for Halloween … but if that is your plan, it is best to begin early — you’ll need to make dozens and dozens of these. 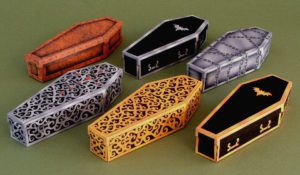 I received a comment from a Grandmother who said her granddaughter would love these!! I agree!! She will probably want her grandmother to make up a lot of them so she can fill them with sweet treats and hand out to her friends … or depending upon her age, she and her friends can make their own …

My friend Ray O’Bannon over at Ravensblight has a whole selection of coffins from which to choose to make any spooky celebration special. 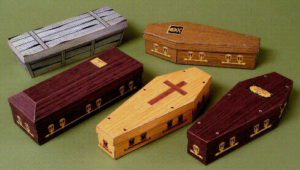 You may find some other items of interest you’d like to make from his Toy Shop — they’re all Haunted Paper Toys you can make. Just print them on your printer using cardstock, follow Ray O’Bannon’s instructions with illustrations and you’ll have some great haunted items to display at your Halloween Party or decorate your house or buffet table …

Just click the images on the page and you’ll be taken to the Ravensblight website to select which of the coffins you’d like to print out.

Here are the links if you’re a bit impatient:

This will give you quite a lovely selection of boxes to have around to decorate your home … or to hide some special sweet treats. I do like them all and have used those with a more square shape for other occasions when I needed an interesting treat box. A footlocker type of box is excellent for kids going to camp or college students going off to school … And, of course, all the ghost hunters who love spending time in cemeteries …

I’m a great fan of the haunted houses. Ray has quite a selection of these and even a grave yard … You can have some fun making a lot of his paper toys. I thought I saw a new one … The Gothic Chapel. It even has a hidden chamber … 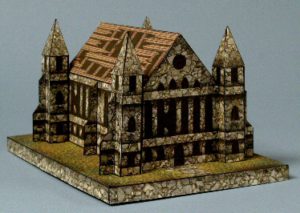 I do need to check it out … and you can, too. Click Here.

Sorry … I got a bit distracted. This always happens when I take a stroll on over to RavensBlight and look around. It definitely feeds my imagination and reminds me of Real Ghost Stories I’ve heard and collected over the years … Let me see if I have one that will go along with coffins, grave yards … and a Gothic Chapel … That definitely seems like a tall order …

It seems that just about every place is haunted or has a haunted history … or ghost hunters or urban explorers spook themselves when they go out exploring and doing their 3 o’clock in the morning challenges. I know I can get a bit creeped out just walking around my backyard during the wee hours of the morning — I sometimes hear strange sounds I can’t identify and wonder if they’re paranormal in nature …

Cemeteries are definitely a bit creepy day or night, but for Patty and Stacy to go out there … what were they thinking??!! 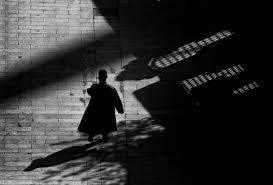 They had experienced shadow figures before. Could it have been a bear … or a person … or a ghost ?

It is good we have so very many ghost hunters who go out to known haunted places to capture video evidence of the paranormal. To prove that there is another realm that enteracts with us … All is fine when these “spirits” are friendly and mean no harm … I honestly can’t say that what both women experienced was harmless …

Knocking Patty down … that was scary!!

They were leaving … They meant no harm … I’ve heard that shadow people are mean and they will physically attack. I’ve been very fortunate that the shadow people I’ve seen out of the corner of my eye are scampering away …

It does make you wonder what is going on …

I hope you enjoyed this post. It did go a bit all over the place … I do like to give you a bit of variety 🙂

This has been some weekend with Halloween Parties . . . and All Hollows Eve is still a few days away …

I don’t know about trick-or-treat-ers running around the neighborhood.

I have noticed there are some strange things going on … last week and over the weekend … This is the reason for sharing this real ghost story with you.

And, I don’t have an explanation as to the strange paranormal experiences others are having … the veil must have lifted to a degree … or our imaginations are on overdrive …

Everyone has quirks. My friend Joan has a thing for leaving doors and cabinets half open.

Doors are to be either opened or closed. Cabinets, she prefers to have closed, drawers, too.

Everyday when she came home from work, doors were half open, cabinets half open, and drawers pulled out.

She decided she had a ghost that was messing with her.

A few days later, at work, she noticed her desk drawers were opened, the door to her office was half open and the filing cabinet drawers were opened and pulled out. She locked her office, desk and file cabinet before leaving. It was something she did every evening as did others in the office.

The janitorial service the company used would lock the doors of the offices. All the employees had separate keys to their desks and file cabinets.

Joan lived alone and no one had keys to her house.

When Joan’s sister, Holly, accepted her invitation to visit the following weekend, Joan asked her to bring her ghost hunting equipment with her.

Holly arrived with her ghost hunting team late that Friday night. Some were going to investigate the office and others Joan’s house.

Joan accompanied half the group to the office (three others) and Holly stayed at the house to investigate with the other half of the group (also three members).

At each location cameras were set up. They also had EMF sensors (also referred to as The Ghost Meter).

They both saw what they believed to be poltergeist activity opening doors and drawers. It appeared to be almost earthquake activity of doors swinging freely half opened or half closed and the drawers made jumping movements — not smooth openings. The kitchen cabinets swung open smoothly and adjusted to closing halfway.

It was all quite odd.

The group decided to do some research about both locations.

The strange thing was that both Joan’s house and the office building were once owned by the same man in the 1920’s. He was an attorney who was rumored to have poisoned his wife so he could marry his secretary. It does seem fitting that she would haunt both locations, but why Joan’s office and not the one used by her former husband?

With more research and consulting a psychic it was uncovered that the annoying ghost had once worked in the office Joan occupied before her marriage.

As has often been believed that poison is a woman’s means of murder, the psychic reasoned the annoying ghost was slowly poisoning her husband, but he discovered her putting cyanide in his food and drink and would switch plates and glasses with hers. So, in the end she poisoned herself.

It is a strange tale, but why was she taunting Joan who was not a relative and how did she know of Joan’s quirk of not liking doors, cabinets and drawers half or partly opened?

The simple answer is observation. This is how she decided to get Joan’s attention.

The annoying ghost didn’t stay with Joan much longer after the truth was uncovered. Did she want Joan to believe her husband poisoned her? Or to acknowledge that she actually poisoned herself?

Does the truth set one free?

Joan still lives in the same house and works in the same office. She thinks of the annoying spirit from time to time and wonders if she’ll return.

She’s relieved that the ghost only messed with her obsession and didn’t try to poison her.

I hope you enjoyed this real ghost story. I did. It had a happy ending … and gave us a bit of insight into the paranormal.

I’m always searching for answers or some insight into the realm of the paranormal … I’m not so much in getting the wits scared out of me … that has happened, but not something I seek …