There are plenty of old houses where I live. I sometimes get a weird feeling from houses, just passing by them.

Some are inviting and others feel creepy and I don’t even want to look at them. Has this happened to you?

I believe every house has the potential of being haunted. Not scary haunted, just having a previous owner who has passed still living there. It starts out with a feeling of being watched. Then you may feel cold or increasingly uncomfortable. Depending upon the spirit, you can either feel welcome or unwelcome. I have walked into houses and immediately wanted to leave. It’s awkward when you’re invited to dinner and just don’t want to stay another second. You truly believe something horrible will happen to you if you do stay. Sometimes you see something out of the corner of your eye. You know you’re not imagining it, but you do shrug it off. You don’t want to say anything, not everyone shares your belief in the paranormal. And, honestly, how do you tell a friend that their house is creepy?

The interesting thing is when you do make contact with a ghost, who doesn’t know he or she is dead.

There have been times when I’ve talked with a ghost and didn’t know it was a ghost. It thought I was a ghost.

I was looking to buy a house a number of years ago. There was a great open house that served food and allowed potential buyers to look around and get a “feel” of the house. I suppose it was a way of imagining how it would feel to live there as opposed to most open houses where they invite you in, quickly show you around and out the door you entered.

It was a friendly crowd who were sitting around enjoying the buffet. I wasn’t sure how many realtors were there and how many were potential buyers. It didn’t matter to me. I was enjoying the setting and was curious about other homes in the area they may have seen. For me, it seemed to be a way of comparing notes of different houses in different price ranges.

I noticed an elderly woman standing off to the side with an unpleasant expression on her face. She seemed to be upset about something. Being a curious person, I walked by her and stood close by, but not too close.

She immediately said, “Why are all these people here?”

I told her it was an open house.

She said there must be some mistake, she wasn’t selling her house. She also explained that no one would listen to her. “These people came early and started setting things up and snooping all over the house. They woke me up at the crack of dawn.”

Then she got a really frightened expression on her face. She was sure her house was haunted by these “party makers.”

Well, I’m not one to tell her they were real. At the moment I didn’t know I was talking to a ghost.

Later, my realtor was asking me why I was standing there talking to myself.

Fortunately, she shared my belief in ghost so I told her I was talking to the previous owner who didn’t know she was dead and didn’t want to sell her house.

She left to talk with the realtor who was hosting this open house. We did make a hasty retreat. He was probably afraid I would tell his potential buyers the place was haunted.

I can only imagine how the family that moves into that house are going to feel to have a resident ghost who doesn’t want them there.

I hope you liked this real ghost story and it got you thinking about the paranormal.

The Scent Of Honeysuckle And An Old Rocking Chair

David bought a small house a year after his wife of 40 years passed.

He needed a change. The house was a constant reminder of the life he shared with his family — the children were grown with families of their own. So, David decided he needed to move on and maybe a new living environment would help him not be so lost and lonely.

In his new home, David. noticed the rooms were filled with junk from the previous owner.  He phoned the realtor to see if they needed more time to remove all the old belongings they left.  After an hour he received a call saying they took what they wanted and he could do as he pleased with what was left.

He busied himself disposing of all that was beyond repair and put other items into another spare room, for the next trash pick-up day. He also set aside some miscellaneous items to see if at a later date he might find a use for them.

He found a set of iron shelves he put on the wall as a bookcase, he used a couple of old chests to display his wine collection and used a sofa, chair, end tables and coffee table to balance things out a bit.

He was pleased there was a dining table with chairs already set up in the dining area and the kitchen still had dinnerware, silverware, and cookware in the cupboards.

He found an old bird cage he cleaned up and decided to put candles in.

He spent most of the day and evening putting together an old broken rocking chair.

He was sitting in the rocking chair and smelled honeysuckle.  He wasn’t aware if any was planted outside, but he liked the scent and if not, he was going to definitely plant some outside.

He looked around the room, admiring all he accomplished and then wondered what was missing.  He was positive something was missing. Consciously, this was the first time he started furnishing his house, but this was all odds and ends of another life, long ago — not David’s life.  Was he remembering something?  Was some entity there directing him?

He walked into the spare bedroom for anything he could add to his living room. He found a clock he could put on the mantle and some figurines of wild life.

When he arranged them on the mantle, he was feeling a bit more “complete.”

He turned around and said very seriously, “Is there someone here? Were you helping me? I hope you don’t mind my using your furniture, book shelves and these pieces I put on the mantle.  I couldn’t throw some of this stuff out.  I didn’t mean to interfere . . .” David didn’t want to say the next part.  He really liked this little house, but he knew in order to have peace with spirits he would have to get it all out.

“If you don’t want me to be here, I guess I’ll have to sell the house and find someone else to buy it and find someplace else to live. If this is what you want, let me know, but please don’t move things around and make a bunch of noise.  That would scare me half to death.  Thank you.”

It seems everything is fine at David’s house. He’s been there for 5 years now.  He has noticed the rocking chair rocking slightly and he feels there is someone there — an older man keeping him company when he doesn’t have friends or family visiting.

Yes, it does seem possible for the living and the non-living to share a space compatibly together.  Very few mention having a resident ghost in their house, but sometimes they do seem just like one of the family.

I do hope you did enjoy David’s Real Ghost Story. 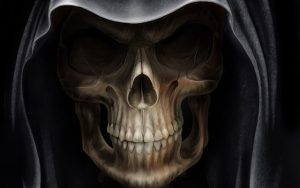